Alex Cooper’s current online-only Discovery Auction has a number of interesting and valuable lots of early American documents and ephemera. These include: 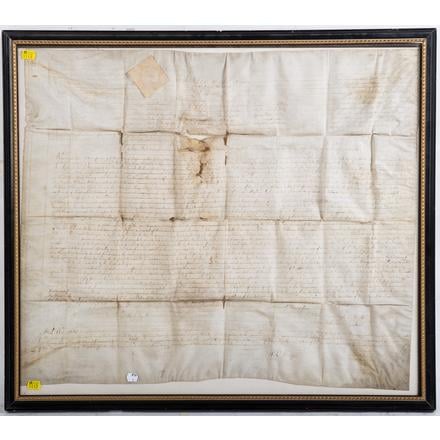 Lot 5113 is a remarkable Washington Family document, an official sealed duplicate of King George II’s resolution, documenting a colonial era land dispute in Stafford Co., Virginia.  In 1727 George’s father, Augustine, had purchased a large farm called Chotank, on the Potomac River below Mt. Vernon.  On his death, the land had passed to Augustine Jr. and Samuel Washington, George’s half-brother and brother, who continued to farm and develop it.  However in 1755, a cousin of the former owner arrived from England and laid claim to the land.  The King in council decided that the Washingtons should keep the farm but pay the claimant a relatively small sum to settle the matter.  The present document is an official copy produced by the Virginia legislature to give to the parties in the case.  The case is well documented, appearing in Hening and a late 19th Century article in the Virginia Magazine of Biography & History, but documents of this type are quite scarce, let alone the association with an American founding family.