What not to miss in Alex Cooper’s upcoming July 22nd Gallery Auction.

The upcoming auction is a Contemporary Art powerhouse.  Whether you are a novice collector or a seasoned buyer, there is something for everyone.  It’s hard to pick just five, but I’ve listed five pieces you must see.

Keith Haring (1958-1990) was an American artist whose work expressed New York street culture including birth, death, sexuality and war.  The piece above was in collaboration with Herb Ritts using the artist’s ripped-up  photographs.  Although not his most recognizable style of the work, his unique collages with Ritts are extremely rare.  It is a show stopper, it’s a political commentary, and it’s a Haring.

I’m thrilled about this piece at such a reasonable art collecting entry point.  Romare Bearden (1911-1988) created amazing work which celebrated the black American experience.  After working several decades as a painter, during the politically tumultuous 1960’s Bearden began creating collages made of cut and torn photographs found in popular magazines that he then reassembled into visually powerful statements on African-American life.  This lithograph is no exception.  The colors are vibrant and bold with a striking composition.

It is difficult to pick a favorite Miro.  Prolific in his painting and masterful with color, there is so much to say.  However, “The Two Ends of the Brush” is a show stopper in color and form and humor with the face in the center. Joan Miro (1983-1993) was a Spanish painter, sculptor and ceramicist from Barcelona.  Of his work Miro was quoted as saying, “I try to apply colors like words that shape poems, like notes that shape music.”

A Russian/French artist (1887-1985) who was viewed as both a pioneer of Modernism and as a major Jewish artist, Chagall felt that Jesus was the true type of the Jewish martyr.  I chose this piece because I cannot stop looking at the faces of the viewers, those there to witness the crucifixion of Christ. So many emotions and expressions and with hidden details like his own self portrait, Chagall commands the viewer to look more closely at the scene and uncover the beauty within the composition.

I can’t stop looking at this!  At first it screams Magritte, “Ceci n’est pas une pipe,” but it’s more.  Hugo Lugo (b. 1974) is a Mexican artist whose work has been shown in cities abroad, including Caracas, Amsterdam, Paris, Mexico City, Bogotá, Hong Kong, Rio de Janeiro and Singapore. His awards include the Mexican Young Creator´s Grant, the National Young Artists Award, and more recently 1st prize at Rufino Tamayo´s Museum of Contemporary Art Biennale.  He says of his art, “The situations in which I place my subjects usually involve an ethical dilemma, a ‘to do or not to do’; not so much as in a moral approach to life, but more about the complexity of the human condition.” One could ponder the meaning of this piece for hours.

Make these pieces yours and bid now! 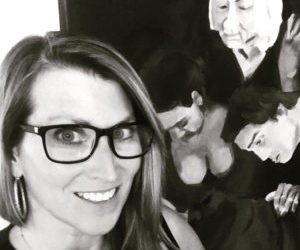