A US History Through its Currency

We have a special August 26th Gallery Auction for US currency. There are lots with notes dated from 1771 to 1928, and we can tell the American story from these notes.

The first currency issued in colonial America was a Massachusetts note from 1690, but it was more British than American. That note is not in our auction, but we do have colonial currency and Continental currency notes, the difference being that the former was issued by a colony/future state and the latter by the Continental Congress. We have notes from Delaware (our first state), Pennsylvania, and New Jersey. All the colonial notes were issued with different purposes, usually to raise money and to retire previously issued notes.

Lot 677 has a Pennsylvania note from March 1771 that was issued for the defense of Philadelphia but was instead used for paving Philadelphia streets—They had infrastructure issues back then too! In that same lot are notes printed in April 1777 for the defense of the colony during the Revolution. Some notes from that issue were black and some were black and red. New Jersey issued £30,000 worth of notes on January 1, 1776, for the purpose of 16-year mortgage loans. They used thick paper with blue threads and flecks of mica to make it more difficult to counterfeit the currency.

All the currency had the message similar to “’tis death to counterfeit.” There don’t seem to be any actual sentences of death before the Revolution, but after the war started, death sentences were passed down: George Washington’s papers have him issuing a death warrant for counterfeiting, and it was carried out in 1778. Before the revolution, people were publicly punished; one man was whipped in the stocks and his ear was cut off.

During the war and in the first decade afterward, inflation took over as the paper currency became worth less and less. One of Alexander Hamilton’s goals was for the new federal government to redeem the Continental debts and assume all the debt of the state governments. Currency was worthless, which led to the expression “not worth a continental.” There was little to no trust in government currency, so banks took on the responsibility from 1792 until 1863 during the Civil War. A bank would deposit money into the treasury and then print currency up to that amount. These notes became known as “broken bank notes” or “Obsolete notes.”

We have an example an obsolete currency in lot 674. Someone collected 14 $5 notes from the Bank of Washtenaw, located in Michigan. These notes are representative of 70 years of Obsolete bank notes, notes issued to raise money for a purpose (various canals in the US), and issues from private parties from 5¢ up to several dollars. These notes supplemented a national coinage system of copper, silver, and gold in coins valued at ½¢, 1¢, 2¢s, 3¢, 5¢, 10¢, 25¢, 50¢, and $1.

During the Civil War, hard money (silver, gold, and even copper) disappeared as banks discontinued specie payments and people hoarded it. Stores issued store card tokens and Civil War tokens to provide small change. Postage stamps had been around for 20 years, and the government got the idea to print postage stamps onto notes and called them “Fractional Currency.” Lot 654 features six different fractional note specimens, and lots 664 and lot 666 illustrate 3¢ to 10¢ notes and 15¢ to 50¢ notes. These were phased out as the war ended, and both hard coinage and US-backed currency was started. 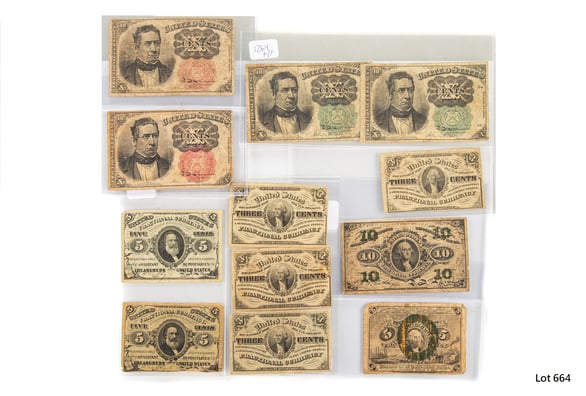 During the Civil War, Sutlers traveled with the various armies. They sold goods to the soldiers and often used coin tokens and paper scrip for the soldiers to purchase their goods. We have an undated Sutler Scrip from that time in lot 628: a 10¢ scrip from Scott's Nine Hundred United States Cavalry, issued by J.R. Bostwick. 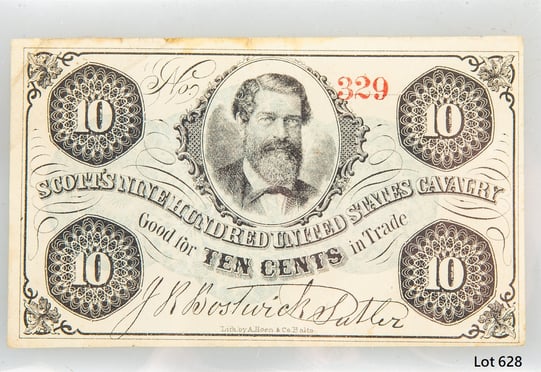 The “other side” in the Civil War also issued currency to cover its debts, purchase items, and pay soldiers. We have an example of a Confederate $500 note (lot 629), which is valuable today because few were issued and fewer still survived. The CSA issued these notes from $1 to $1,000 and all stated something like “Two years after the ratification of a Peace Treaty between the Confederate States and the United States… The Confederate States will pay to the bearer on demand” the amount of the note. Of course, this never happened, and all were worthless after the war other than as souvenirs and collectibles. J.C. Upham of Philadelphia created almost perfect copies of CSA notes from his store in Philadelphia. At one point during the war, it was estimated that 20% of the circulating CSA notes were his “souvenirs.” He printed them with a disclaimer at the bottom of the note that they were made by him, and enterprising people simply cut that part of the note off and used them as currency. The US government eventually shut him down because they didn’t want the CSA to do that to US currency.

We have examples of Legal Tender Notes (lot 616, 618, 620, and 631); Silver Certificates, which enabled someone to walk into a bank and get the note’s denomination in silver (lots 641, 622, and 623); and Gold Certificates (lot 615), represented in both small and large size currency. Some of the currency developed fancy nicknames because of images on the notes. $5 “Chief” notes (lot 617), $10 “Bison” notes (lot 618), $10 “Tombstone” notes (lot 623), and $10 “Poker Chip” notes (lot 620) are examples of these. Notes from this era are considered much more attractive than modern notes: A good example is lot 631. It has a pair of 1896 $1 Silver Certificates, which are nicknamed “Educational Notes” because the vignette depicts History teaching Youth.

Banks continued to issue their own currency as a chartered bank system developed. The bank would get a federal charter, deposit money into the treasury, and issue Federally designed notes with the bank’s name on them. These notes became the “national currency” system. Each style and type looked the same across the country, and only the bank name and charter number was different. Over 14,300 banks joined the system of chartered banks. We have examples from many states, some quite rare such as lot 637, Elkins National Bank, West Virginia, from which only 2 or 3 examples of our 1902 $5 Plain Back note are known. There are many examples of notes from Maryland and Baltimore. Lot 632 is a 1882-1902 $5 Value Back from the Denton National Bank of Maryland, and only a handful of these notes are known to collectors. Baltimore is represented by banks in lot 634. Notes from Baltimore banks before 1902 are rare because of the 1904 Baltimore fire, which blazed through many downtown banks.

The national notes became small size notes in 1929, along with all other US currency. The artistry soon disappeared from US currency, and the only remaining differences were the different Presidents that appeared on the various denominations.