Eugène de Beauharnais and The Legacy of Imperial Silver 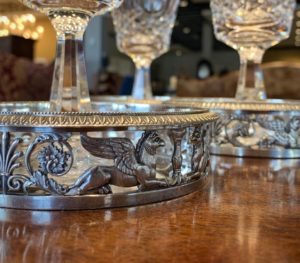 When Napoleon Bonaparte married Joséphine de Beauharnais in 1796, he created a lineage of aristocracy that would endure well into the 20th century. Napoleon was 27 years of age when he married Joséphine de Beauharnais, six years his senior. Her ﬁrst husband, Alexandre de Beauharnais, was a victim of the guillotine during the Reign of Terror in post-revolutionary France. Joséphine was widowed with two children when she met Napoleon. Initially, it was a marriage of love, at least on Napoleon’s part. Each engaged in romantic affairs during the marriage and although their relationship changed, he loved her deeply. The marriage did not produce an heir and Napoleon divorced Joséphine in 1810. She died four years later. Prior to their divorce, Napoleon adopted and bestowed upon her oldest child, Eugène de Beauharnais, the title of Duke of Leuchtenberg. That single decree created an aristocratic line for generations, one that crossed countries and cultures. Eugène’s descendants would marry into the Imperial Russian, Swedish and Brazilian families, among others. 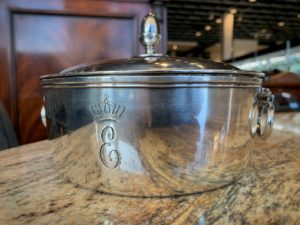 Alex Cooper Auctioneers is honored to offer Imperial silver from Eugène de Beauharnais, his son Maximilian and other descendants of the de Beauharnais family. This is a rare opportunity to acquire Imperial objects with an impressive lineage and direct line of provenance. Eugène’s Imperial monogram is visible on lots 423-430. Maximilian, his son and 3rd Duke of Leuchtenberg, married Grand Duchess Maria Nikolaevna of Russia in 1839, the same year the creamer represented in lot 431 was made. It bears Maximilian’s Imperial monogram and perhaps was a wedding gift, later separated from a larger tea and coffee service. The charming tea caddies in lot 433 also bear his Imperial monogram. The simplicity of form and function of this collection is challenged with the high Empire style of lots 438 and 439. They do not bear an Imperial monogram but they tell a story of sumptuous living. These objects are a glimpse into a bygone life of nobility, one of privilege and refined beauty. Alex Cooper hopes you take the opportunity to view this collection and appreciate its significance and representation of history. 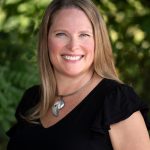