What is Snake Jewelry?

Signifying themes as varied as sin and temptation, security and healing, immortality and renewal, and everlasting love and wisdom, the symbol of the snake has a rich history spanning cultures and millennia. From its seductive powers in the Garden of Eden, to Medusa’s mythological hair and Cleopatra’s fabled death, the snake has long transfixed and bewitched us. Indeed, we have adorned ourselves with the serpentine form since our prehistoric ancestors began making jewelry thousands of years ago. Unlike many jewelry motifs, the serpent has never really gone out of style, with prominent jewelers like Tiffany & Co. and Bvlgari featuring the snake in their most current designs. Below we explore just a sampling of serpent-themed jewelry from antiquity to the present day, and discuss the best options for buying snake jewelry of your own. 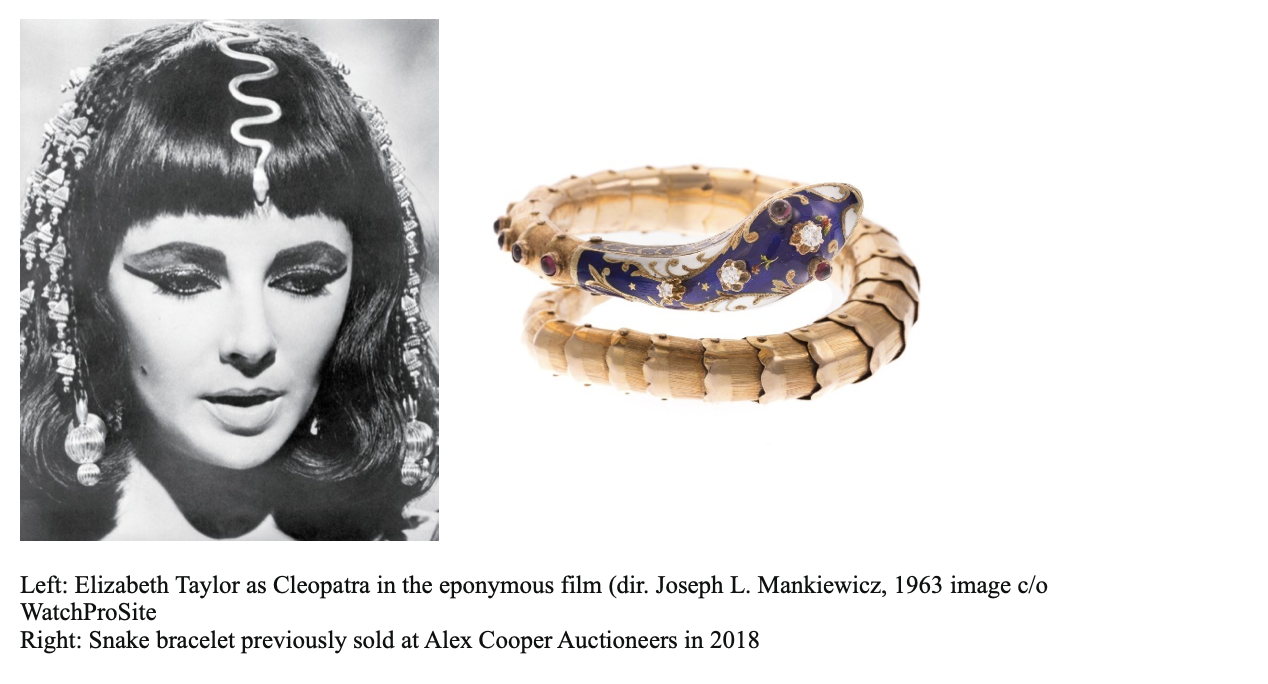 The coiled snake was a popular form for bracelets and rings during the Hellenistic and Roman Republican periods. Ancient Greek and Roman women, as well as some men, wore bracelets—or, more accurately, armlets—that took the form of snakes wrapped around their upper and forearms. Many surviving examples display small gemstones, such as garnets, for snake eyes and were cast in high-karat gold. Ancient jewelers often hand-chased finer details, like the snake’s scales and features of the head, after the casting process. 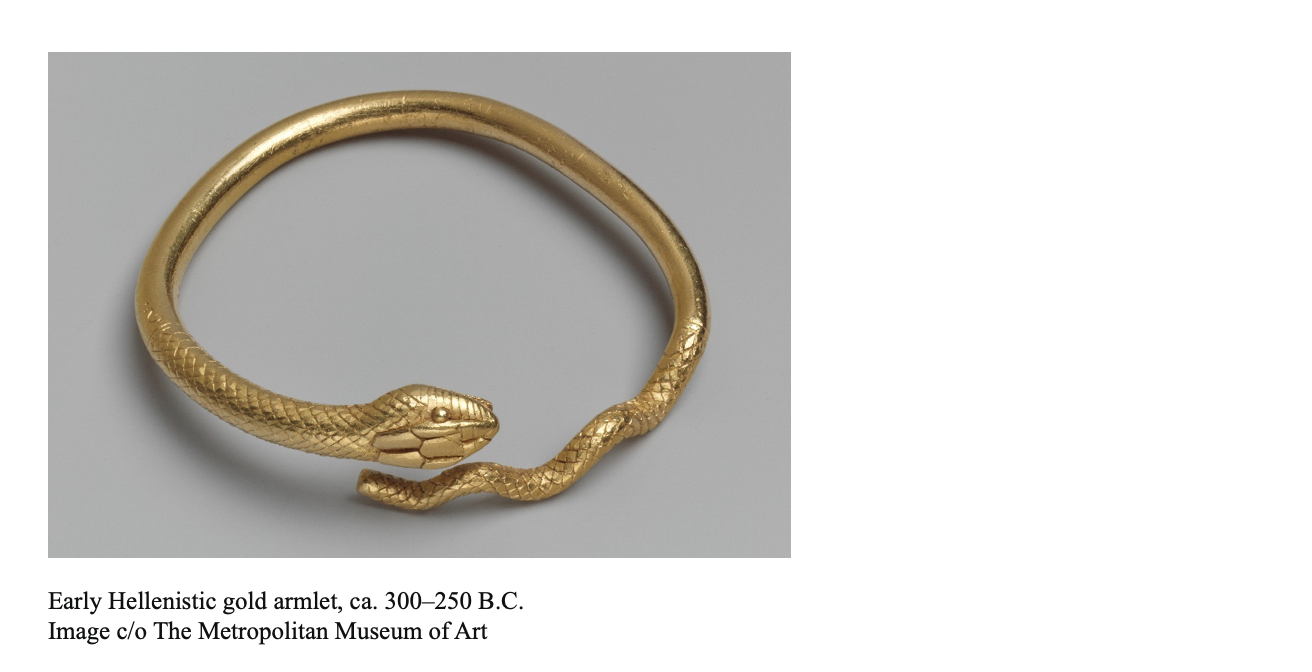 The snake held a variety of meanings in ancient cultures. Despite being a venomous creature, the serpent was a symbol of protection and healing in Greek mythology. Asclepius, the Greek god of healing, sometimes appeared to his patients in the form of a snake. And his divine daughter, Hygieia, the goddess of health, was often depicted holding a serpent in statues and paintings. Also a symbol of love and desire, the snake can be seen coiled around the Greek goddess Aphrodite’s arms or legs.

The serpent additionally took the form of the Ouroboros in ancient Egypt, Greece, and Rome (and again in the Victorian and Georgian eras). The Ouroboros is an ancient alchemical symbol that portrays the snake devouring its own tail in a continuous cycle of destruction and renewal. Perpetually shedding and regrowing its skin, the snake symbolizes the eternal circle of life and regeneration. While few ancient jewelry examples featuring the Ouroboros have survived, a great deal of Victorian pieces reviving the symbol are still with us today.

The snake symbol enjoyed a massive resurgence in popularity during the Victorian era (1837-1901). Queen Victoria, the ultimate trend-setter, favored serpent jewelry, which came to symbolize wisdom and eternal love during this period. Victoria chose to wear a bracelet featuring three intertwined serpents to her first royal council in 1837, likely meant to fashion an image of intellect and acumen. In 1839, Prince Albert gave Victoria perhaps her most prized piece of snake jewelry—a coiled serpent engagement ring set with her emerald birthstone.

Famous archeological excavations in Pompeii and Egypt gave rise to ancient revival themes in Victorian jewelry, often centering on motifs such as snakes and scarabs. Victorian mourning jewelry, in particular, used the Ouroboros to suggest an eternal bond with the departed.

One of jewelry’s many powers is its ability to convey messages on behalf of its wearer. U.S. Secretary of State Madeline Albright elevated this power to an art form with her vast collection of diplomatically-charged pins, currently on display through the National Museum of American Diplomacy’s online exhibition, Read My Pins.

The story behind her Victorian serpent pin makes it one of the most well-known pieces in her collection. In 1994, when Albright was ambassador to the United Nations, Iraqi leader Saddam Hussein called her an “unparalleled serpent” in the Iraqi press. Soon after, she wore the snake pin to an important meeting with Iraqi officials. While Albright says that she didn’t think it too grand a gesture at the time, a member of the UN press who knew about Hussein’s insult asked the then-ambassador about the pin after the meeting. Smiling, Albright responded by saying that her sartorial choice was meant to send a message. From that moment forward, she began carefully choosing her pins to communicate her diplomatic agenda, famously remarking, “read my pins.”

Perhaps no luxury jeweler has better capitalized on the snake’s allure than Bvlgari. The maison started creating their iconic Serpenti watches and bracelets in the 1940s and have been crafting new innovations with the serpentine form ever since. Drawing on the Bvlgari founders’ Greco-Roman heritage, the Serpenti collection features pieces that coil around the wearer’s wrist in homage to ancient snake bracelets and armlets. Bvlgari’s 2016 SerpentiForm exhibition in Rome celebrated the maison’s long history with the serpent symbol.

Where Should I Buy Snake Jewelry?

The snake remains a ubiquitous jewelry motif today. So, where is the best place to buy snake jewelry? (Besides Bvlgari, of course.) If you’re looking for contemporary snake-themed jewelry, we recommend seeking out individual designers or brands and then shopping around for the most competitive price. Companies like Ana Luisa and Mejuri carry more affordable snake designs based on ancient examples that can be purchased through their websites.

Jewelry auctions are ideal for antique or one-of-a-kind pieces of snake jewelry. Alex Cooper Auctioneer’s upcoming August 25 auction features an impressive snake necklace (Lot 238) by Italian jeweler Annaratone & Magyary, which recalls its Victorian predecessors with its ruby eyes and turquoise head. The auction also offers a unique ring (Lot 270) in which the serpent form is coiled around three pearls.

With a multiplicity of meanings and perennial appeal, it’s little wonder that snake symbol has remained a common jewelry form--one that isn’t going out of style any time soon.

Frank, F. (2011). Serpentina: Snake Jewellery from Around the World. Arnoldsche. 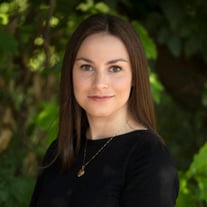