Alex Cooper’s current online-only Discovery Auction has a number of interesting and valuable lots of United States postage stamps. These include:

Lot 5100, an original album from the collection of President and ardent philatelist, Franklin D. Roosevelt, containing 29 covers sent to him between 1932 and 1939 from around the world, with the original Herman Herst Jr. signed certificate. 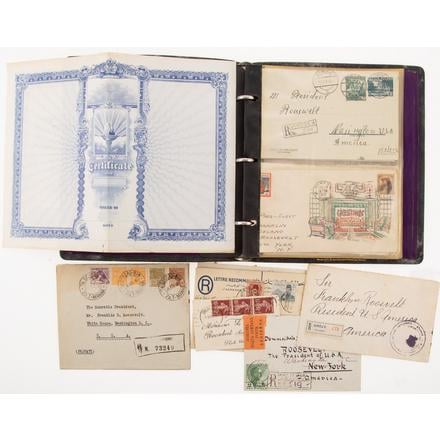 Lot 5104, a spectacular cover bearing sixteen of the 12 c. black stamp, issue of 1857 (Scott #36), posted from Albany, NY, to Scotland in 1858.  Probably originally enclosing a raft of legal papers, the small city post office didn’t have stamps in high denominations to cover the overseas postage, resulting in a cover plastered with stamps, each of which represented 4 times the going rate for a small domestic letter.  This cover is illustrated in Brookman’s classic book, Postage Stamps of the 19th Century, Vol. I, p.245.

Our rare book and ephemera expert, Richard Hall, is always pleased to consult regarding the potenial sale of your items at auction.